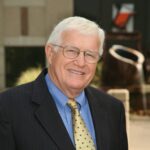 In 1955, Jon began a 65-year career in the refractories industry working for Norton Company (Saint Gobain), in Worcester, MA. He joined Allied as Sales Manager in 1970, when Allied was a small and relatively unknown refractory company. At that time, Jon was the only salesman.

Jon led the transformation of Allied to an employee owned (ESOP) company in 1986 and employee ownership continues to be the cornerstone of Allied’s success.

Determined to expand Allied overseas, Jon started a joint venture in South Africa in 1997, a wholly owned affiliate today. In 1998, he boldly led Allied into China while most others hesitated. Allied’s overseas manufacturing presence continued into The Netherlands in (2005), India (2012), Brazil (2012), Chile (2015), and Russia (2017). Under his leadership, many of these locations have expanded – some more than once.

Throughout his career, Jon was relentless in his pursuit of success for Allied. His energy and passion for both customers and employees, showed in everything he did. Jon’s leadership guided Allied to become the company it is today.

Mr. Tabor remains on Allied’s Board of Directors.

About the Author: Allied Admin